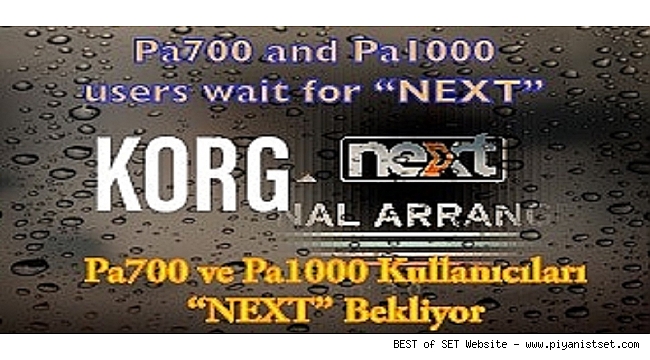 As it knowns, in march 2019 the “NEXT” update has been released for Pa4x by Korg Company. With this update, 400 mb. sample memory reached to 1.5 gb. (3gb with compress) Thus users were able to upload more sounds, samples, styles, etc.

Again we know that;  The pa700 and pa1000 keyboards can read the data of the Pa4x keyboards because of they have the same type operation system. But these two keyboards have not got the “NEXT”.

Even if some music authorities or Korg local distributors talk about the NEXT update coming soon for the Pa1000 and Pa700, we haven't heard any official announcement by Korg Company so far as they did in Pa4x for NEXT update in February and March. (piyanistset.com)

Considering that pa700 is as capable as Pa1000 and Pa1000 is as Pa4x, users have the right to know when the NEXT update will be released for these both devices.

In any case, the increase in something would make the users very happy. So we call the Korg company, “Come on Korg, you can do it” and we want you to know that there will be some surprises for pa700 and pa1000 very soon. (editor: piyanistset.com)